Andrei Roudenko is the twelfth Conductor of the Choir of the Church of All Russian Saints in Burlingame, California.

Prior to his appointment in June 2001, he was founder and Music Director of the Russian Chamber Chorus in Boston; he was a long-time performing member of Boston Sym­phony Orchestra’s Tanglewood Festival Chorus and Boston’s Handel and Haydn Society.

Roudenko was guest conductor of the Karel­sky Academic Chorus in Russia in 1991, and in 1992, conducted members of his Russian Chamber Chorus and Voskreseniye Choir in a joint performance and recording of Rachmaninoff’s All-Night Vigil at Mosfilm in Moscow.

He made his Boston Symphony Hall conducting debut in 1995 in a concert of Russian liturgical and folk music that featured baritone Dmitri Hvorostovsky.

In 1996, Roudenko collaborated with the Bos­ton Philharmonic Orchestra in a performance of Shostakovich’s 13th symphony, featuring baritone Sergei Leiferkus and the men of the Russian Chamber Chorus.

Roudenko served as language and style consultant to many Boston-area choruses in their exploration of Russian vocal music and made his concert solo debut in Gretchaninov’s Sugubaya Ekteniya with Boston’s Chorus pro Musica.  He began singing in church ser­vices at the age of seven, singing with his father, Vladimir Pavlovich.

Since coming to Burlingame, Roudenko has prepared numerus adaptations of classical church selections specifically for the All Russian Saints parish choir, and established a Choral Presentations Series at the parish, consisting of recitals, workshops and lectures.  He sings in Sergei Riabchenko’s Diakonia male choir in San Francisco and frequently joins in singing with the Holy Virgin - Joy of all Who Sorrow - Cathedral choir on major Holy-days.

Roudenko is grateful for the rich choral tradition that was created and nurtured by his eleven predecessor parish choir directors, and to the dedicated singers who share his love for the choral music of the Russian Orthodox Church. 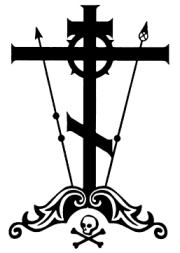